The hip labrum is important for joint stability and kinematics and has nerve endings facilitating proprioception and pain. Treating the damaged labrum is essential due to the established correlation between labral damage and the development of osteoarthritis. Labral repair has yielded superior outcomes to debridement, and therefore, it is the first-line approach to repair the labrum. However, in certain cases the labrum may be irreparable, due to extensive tearing, calcification of its substance or previous labral insufficiency after previous surgery. In these cases, labral reconstruction may offer a means of restoring the anatomy and function of the native labrum.

While labral reconstruction is a relatively new technique, it has emerged as an established treatment for irreparable labral tears in the hip. Furthermore, literature has shown labral reconstruction to have better outcomes than debridement in the case of an irreparable labrum. Our previously published technique involves measuring the labral defect with a suture or an arthroscopic measuring tool. This technique requires precise defect measurement, accurate graft preparation and anchor placement after introduction of the graft. Each of these steps can present pitfalls.

This Surgical Technique presents a modified technique for labral reconstruction — the knotless pull-through technique. This technique takes advantage of newer knotless anchor technology, which allows for placement of all anchors prior to introduction of the graft and eliminates potential graft size errors. The aims of this technique are to create a reproducible and efficient procedure for labral reconstruction, which accurately restores native labral anatomy and function.

Once the graft is introduced into the joint through the DLAP portal, the anterior part of the graft is anchored to the rim adjacent to the native labrum.
Images: Domb B 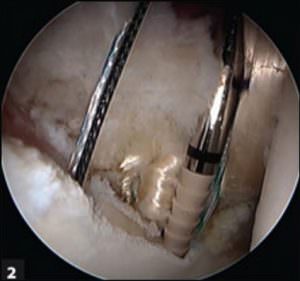 Once the graft is introduced into the joint through the DLAP portal, the hanterior part of the graft is anchored to the rim adjacent to the native labrum.

The patient is placed in the modified supine position in slight Trendelenburg position on a traction table with a well-padded perineal post. A spinal needle is inserted into the joint for ventilation. Traction is applied to the nonoperative leg before application, as needed up to 50 lbs, on the operative leg. Anterolateral, mid-anterior, posterolateral and distal lateral accessory portals (DLAP) are used to access the hip joint throughout the procedure. A thorough diagnostic arthroscopy is performed to assess the ligamentum teres, labrum, cartilage and bony morphology. This assessment is integral for intraoperative decision-making process.

The graft is positioned along the rim prior to applying tension to the knotless sutures. Mild tension also must be applied to the graft using the suture through the posterolateral portal to prevent graft malpositioning.

An irreparable labrum in an appropriate patient would indicate labral reconstruction. Once confirmed, labral reconstruction is indicated, the remaining labrum is debrided and the acetabular rim is decorticated. Knotless SutureTak anchors (Arthrex) are placed on the acetabular rim with approximately 6 mm to 8 mm of spacing (Figure 1). A drill hole is created in the most anterior aspect of the segmental labral defect, which will be used to introduce a PushLock anchor (Arthrex) attached to the graft. The graft is prepared using a double-stranded semitendinosus allograft, with locked permanent sutures in each end, resulting in a minimum graft length of 12 cm. Absorbable sutures are placed every 2 cm in order to maintain graft shape and integrity. 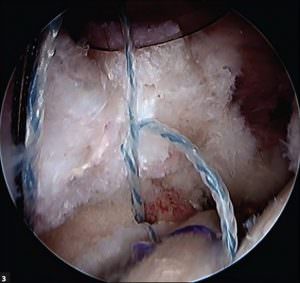 The graft is positioned along the rim prior to applying tension to the knotless sutures. Mild tension also must be applied to the graft using the suture through the posterolateral portal to prevent graft malpositioning.

The graft is introduced in the desired position along the rim after applying tension to the knotless suture.

The graft is secured in the desired position along the rim after applying tension to the knotless suture.

The posterior end of the graft is amputated to the desired length. This ensures the graft perfectly covers the segmental defect and removes the necessity of precise labral defect measurements prior to the procedure. 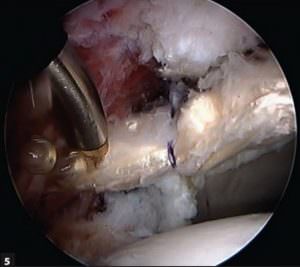 The posterior end of the graft is amputated to the desired length. This ensures the graft perfectly covers the segmented defect and removes the necessity of precise labral defect measurements prior to the procedure.

The graft is secured to the acetabular rim using the pre-placed Knotless SutureTak anchors. Mild tension is maintained on the graft while the sutures from each of the Knotless SutureTak anchors are sequentially passed around the graft and shuttled through the internal mechanism (Figure 3). The sutures are then tightened to the tension needed for the graft to securely attach to the acetabular rim, using the one-way catch mechanism (Figure 4).

Following completion of the reconstruction, the end of the graft is amputated to the appropriate length using electrocautery (Figure 5). After amputation, the excess graft is pulled out of the joint through the posterolateral portal using the locked suture, which was stitched in the back end of the graft. This yields a graft exactly fit for the segmental defect (Figure 6). Once traction is released, the suction seal between the femoral head and the graft is evaluated (Figure 7).

The labral reconstruction is completed, which fills the area of segmental labral loss. 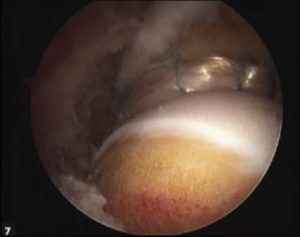 The suction seal is evaluated after the graft is secured along the rim.

Knotless labral reconstruction using a pull-through technique takes advantage of newer knotless suture anchor technology and allows for placement of all anchors prior to introduction of the graft into the joint. This can minimize surgical time and reduce potential suture management challenges. Furthermore, pulling the graft through the joint with the back end first and out the posterolateral portal allows the graft to be tensioned throughout the steps of suture anchor fixation. Amputation of the graft after completion of fixation ensures complete fill of the area of segmental labral defect.

The main limitation to this technique is its technical complexity. Attention to suture management is required throughout, and care should be taken to avoid over-tensioning of the anchors, which can over-evert the labral graft, disrupting its seal against the femoral head.

Benjamin G. Domb, MD; and Itay Perets, MD, can be reached at:

Disclosures: Domb reports is a paid consultant and presenter or speaker and receives IP royalties and research support from Arthrex. Perets reports no relevant financial disclosures.